Anyone that knows me well knows that I absolutely devour food media. From docuseries like Chef’s Table, to podcasts on the future of farming in North America, from early Martha Stewart cooking shows, to gorging on the Instagram feeds of home cooks and bakers who made it big as bloggers. If food is the focus, count me in. And no one who enjoys food shows, writings, or anything food related can honestly say that they have never heard of Anthony Bourdain. He is one of the most prominent chefs in the industry, famous for his tell-all book Kitchen Confidential and his various travel and food shows like Parts Unknown. In my mind, his fleet of books and television shows are the Classics. Each episode bringing hilarity, absurdity, incredible meals and just genuinely cool experiences. But for me, the best part about Bourdain’s stories is that they aren’t microscopically focused on top restaurants and chefs, or even the food in general. The best part is that the sharing of a meal ignites a conversation or begins an adventure.

Each new place Bourdain visits and each meal he has there brings about a conversation of the history and struggle of a culture, how it grew in to existence today and how it will hopefully progress in to the future. As a a former English Lit student and self proclaimed foodie, this is what really excites me about food, that it can be fundamental to learning about a place and its population, whether throughout time or geographically. Not to mention the interesting people Bourdain dines with offer up some even more interesting activities (see: impromptu tattoos, firing ranges, house parties and more). But of course, its the incredible food that always keeps me coming back. Watching Anthony Bourdain enjoy literal feasts with people in extraordinary places not only makes my mouth water in jealousy, but truth be told it lit a fire under my ass to do the same.

This past March while taking a “quick” study break I was watching one of Bourdain’s shows The Layover (which I highly recommend if you’re looking for your next travel destination). In this particular episode he was visiting the small island nation of Singapore. At the time I was watching the show I just so happened to be considering a trip to Southeast Asia post graduation. All it took was 45 minutes of watching Bourdain run around Singapore on the MRT, drinking Tiger beer after Tiger beer and eating way too much fried food for me to realize not only that I had to go to Singapore, but that a trip to Asia would be a once in a lifetime experience. 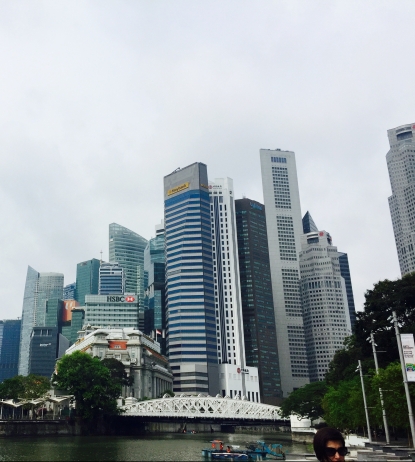 Singapore’s slogan is “City in the Garden” 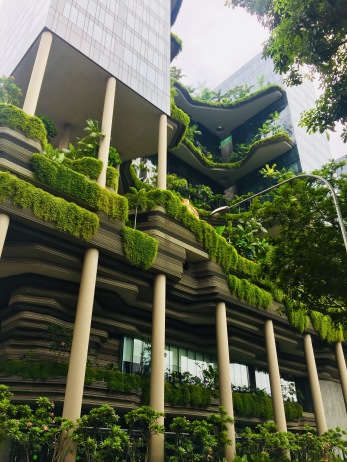 Two months of final exams, trip planning and graduation ceremonies later, and my boyfriend Jordan and I arrive in Southeast Asia for a month of adventure. First stop: Singapore. Having only scheduled just less than two days there, we had a full schedule of foods to try and things to see. The star of Singapore cuisine according to Bourdain, is Hawker centres. Something most people have never heard of – including myself at the time – but let me tell you they are without a doubt worth a visit to Singapore. Think of a Hawker centre as a gathering of food trucks or hot dog stands, but instead of Chicago jumbo dogs, they’re serving up dishes that combine the Indian, Malaysian and Chinese cultures which make up the population in Singapore. The result is incredible. With staples like grilled seafood, fried rice dishes and barbecued meats, Hawker centres are a cannot miss. 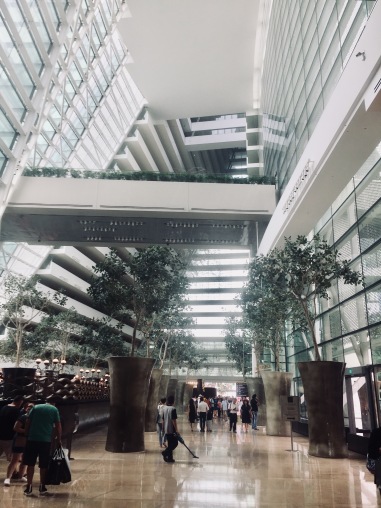 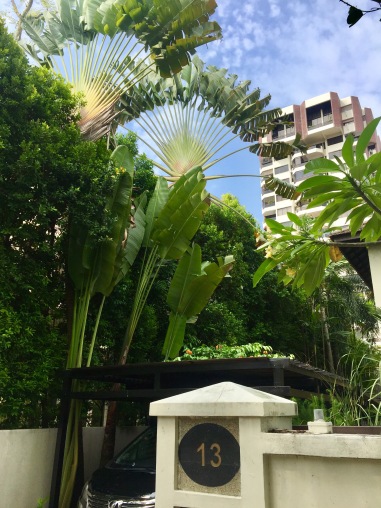 Our hostel for the night was conveniently located in downtown Singapore along the Boat Quay, one of three tourist boardwalks along the Singapore River. After a brief but much needed lie down in the AC we wandered the Boat Quay for some dinner. Our roommate from Japan had told us that chilli crab was a must try for first timers in Singapore, so we were on the lookout. We had a seat on one of the many patios along the boardwalk with a gorgeous evening view of the city, and enjoyed our second round of Tiger beers for the day.

For our first night in such a foreign place you would probably think that we would be a little more alert to scams. Maybe we were just too tired, or too excited to be there that we didn’t notice the super fine print under the seemingly fantastic chilli crab price that said “per 100 grams”. So when the waitress tried to explain in very broken English that the crab weighed 1.6 KG we brushed that off as no big deal. Did she seriously think we couldn’t eat a whole crab?! When the bill came and it read 160 Singaporean dollars (which roughly converts to exactly the same in Canadian dollars) we felt pretty stupid and a little peeved to say the least. But what’s an adventure without a few missteps? 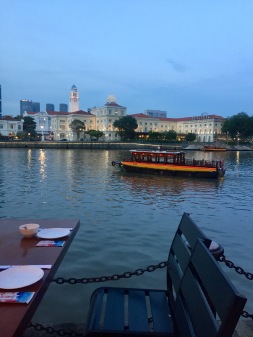 Dinner and a View 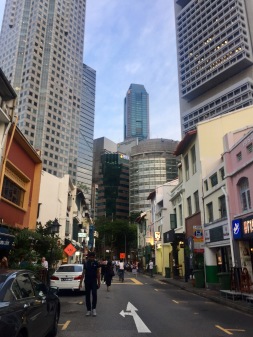 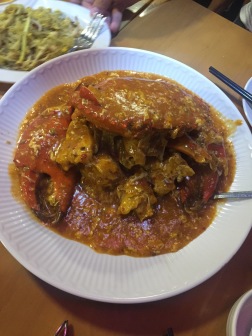 We were determined to redeem ourselves on day two, so we hit the town with some pep in our step. The traditional Singapore breakfast is known as Kaya Toast. Located in nearby Chinatown, Ya Kun Kaya Toast is one of the originators of the popular breakfast and came highly recommended to us by Jordan’s family friend.  Hear me out for a moment because this breakfast definitely sounds a bit odd, but it was pretty delicious. Kaya Toast consists of two pieces of thin toast almost like a cracker with a sweet butter filling. Here’s the interesting part, the toast is dipped in and eaten with two very soft-boiled eggs. And I mean soft like just barely cooked. When the eggs arrive to the table you add soy sauce, salt and pepper, stir together and dig in. Jordan went with the traditional Kaya toast and I, ever the baked sweets lover, tried it with “French toast”. We also needed some coffee to fuel up for the day, Jordan went iced in an effort to cool down, I went hot in a reverse psychology effort to cool down – neither way worked but they were rich and creamy and gave us some needed energy.

The downtown core of Singapore is a gorgeous blend of old English colonial style buildings and massive modern high-rises towering over them. We did a bit of wandering around after breakfast, but the heat truly is debilitating with temperatures in the high 40s.  We couldn’t handle much walking and so headed to lunch fairly soon after breakfast mainly due to a desperate need to sit in air conditioning, but I wasn’t complaining about more food. 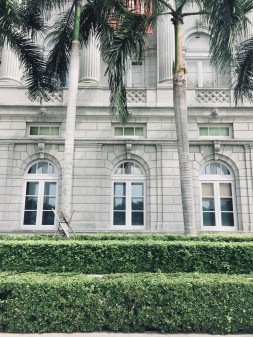 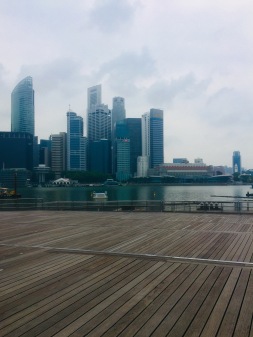 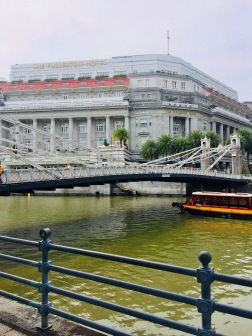 Lunch was at Michelin star restaurant Din Tai Fung. Located in a Chinatown mall, it was a bit hard to find, but worth the search. We indulged in handmade steamed pork dumplings and soft duck buns. Ranked in the top 10 restaurants in the world by the New York Times in the 90s, this was definitely an out of the ordinary dining experience for both of us. Diners can watch the chefs hand-making the dumplings, ooo-ing and ahh-ing as the baskets are set in the steam. The traditional preparation of cultural food is something I really geek out about as a foodie. It was a close second for my favourite part of the lunch – the dumplings were just too hard to top. 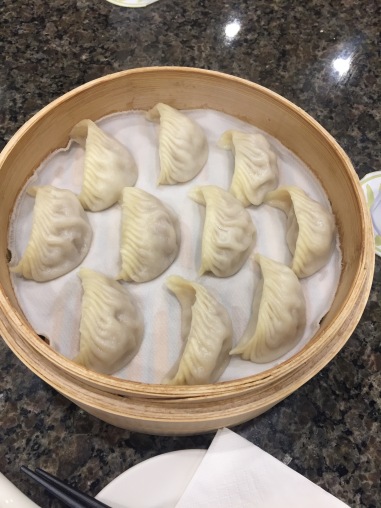 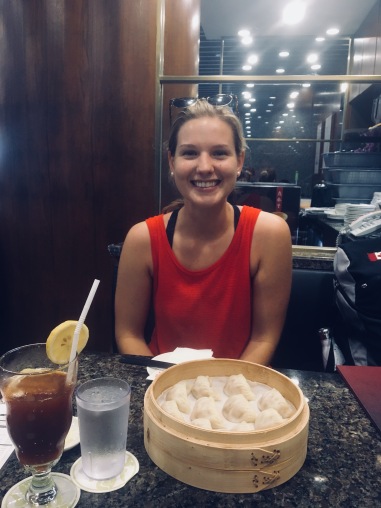 With only a few more hours till our flight we decided to explore the famous Clarke Quay on the Singapore river. When we arrived, the humidity of the afternoon was really getting to us so we plunked ourselves on a patio beside the river and enjoyed a few more Tiger beers. Our glasses were emptied quickly but we sat for a while reflecting on the first two days of our trip. For me, I was thinking back to two months earlier when I had been watching Anthony Bourdain drink and eat his way through the exact same city. If it hadn’t been for that episode I never would have ended up here, eating at Hawker stands, a Michelin star dumpling restaurant or cooling off with several Tiger beers. Sadly, when we first arrived in Singapore excited to do everything Bourdain had done, news broke that he had passed due to suicide. It was devastating to hear that one of my idols had passed, let alone while visiting a place I had only discovered because of him. Sitting on the patio, I was so appreciative to be on this adventure and even more appreciative that I had had the opportunity to learn as much as I did about food and travelling from one of the greats. 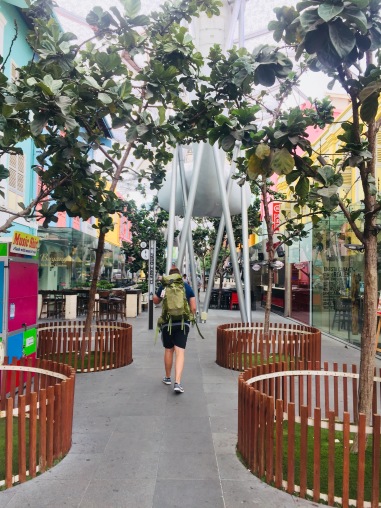 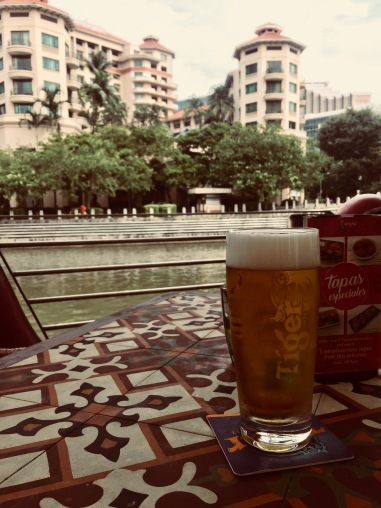 From street markets, and local-favourite dive restaurants, to home cooked meals prepared with love and experience, Anthony Bourdain’s adventures and stories showed me that a love of good food goes far beyond white table cloths and Michelin stars, or even restaurants for that matter. Wholeheartedly, I credit Anthony Bourdain in part for inspiring me to start this blog, to share my own food adventures, more importantly encouraging me to seek out those adventures in the first place. So thank you Anthony, for sparking my love of eating and food in to something totally inspirational, and completely soul consuming. Rest in peace, you will be greatly missed by many.

View all posts by Sandra.S

One thought on “Tiger Beers with Anthony Bourdain”