You’ve been waiting to meet him your entire life. On a day that you will look back on as the happiest day of your life, you finally do. He’s taller than you by quite a bit (thank God), he approaches slowly and offers a cute smirk, attracted to the bright coloured shirt you chose to wear for your first meeting. You share some bananas and he gulps his down peel and all. You walk back with him to his place to have a mud bath, its very romantic. Afterwards you smile to yourself as you’re driving away at his overwhelming adorableness. He isn’t like most guys, he’s actually an elephant, and he’s basically the love of your life.

When the inevitable question “what was the highlight of your time in Asia” gets asked, my immediate answer is the elephant sanctuary in Chiang Mai, Thailand. Partially because its a blanket answer for quick conversation, but mainly because of my love of elephants. For the longest time I’ve thought that elephants were the cutest creature (way before it was ~trendy~ to like them, might I add). Several stuffed elephant gifts and photos with elephants from afar at the zoo, all led up to THE day in Thailand that I would finally get to meet and hangout with my elephant friends.

Elephants are one of Thailand’s main tourist attractions. Indigenous to the Northern jungles of the country (and almost an entirely different species than African elephants) they are to this day the national animal of Thailand. They are featured everywhere from bank logos, to street art to the ever popular “elephant pants”. 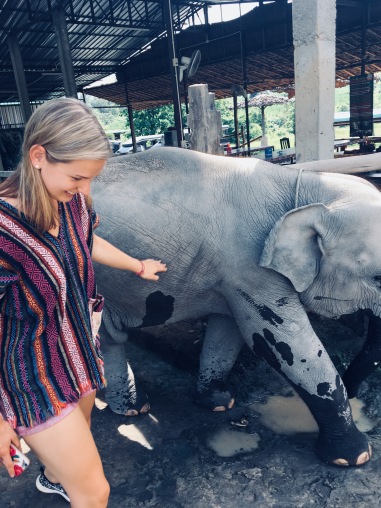 When encountered by Thai jungle tribes, wild elephants were believed to be man’s natural enemy – probably due to their size and protective reaction upon seeing a human for the first time. Despite this, it didn’t take long for the Thai to domesticate and enslave the loyal and loving creatures. Much like the work horse of North America, Thai elephants were used for farm work and manual labour. But the hefty cost to keep and feed them meant that many struggling farmers eventually sold their elephants in to the growing entertainment industry – reducing them to lives of chains and riding and unhealthy environments.

Elephant’s grave mistreatment in the history of Thailand, has led to sanctuaries, like the one we visited, thankfully becoming the norm for many of these gentle sweeties. Sanctuaries allow formerly domesticated elephants to live as they would in the jungle, without the risk of releasing them in to the wild. There’s no riding and no chains. The elephants are simply fed and cared for and loved as they deserve to be. The elephant trainers in sanctuaries are a special part of their new lives too. Each elephant has one trainer whom they become emotionally attached to, like “their person”. They listen and respond to them, always staying close by their human friend. 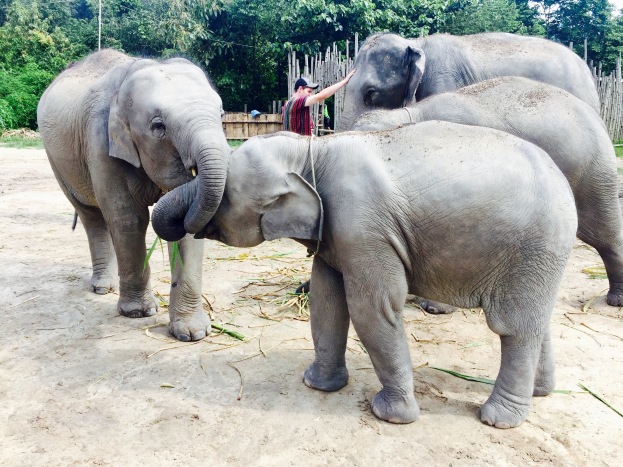 The cost to visit these sanctuaries certainly isn’t the cheapest tourist attraction, but it was worth it for me as an elephant lover, and I would assume for anyone else who wants the best for these lovely creatures. When you realize that the money is going towards the care and protection of the cuties, instead of to people who use them solely for profit – it feels worth it.

My day with the elyphants was everything I was hoping it would be – yet another day on this trip where I didn’t stop smiling. But there was still so much more to do in Thailand. And with only about a week and a half left in Asia, we definitely didn’t hold back.

Our time in Thailand began in the Northern city of Chiang Mai where we got to meet the elephants, as well as other classic tourist things like a fish foot spa (absolutely horrible if you have ticklish feet, I DO NOT recommend), Thai massages which I loved and Jordan thought too painful to enjoy, a Thai boxing match, several gorgeous temples, and a massive street market to do some souvenir shopping for family and friends (elephant pants for everyone!) After three days in the rather laid back vibes of Chiang Mai we made our way to the infamous southern islands of Thailand. Here, we met up with our friends from home for a second round of intense beach partying and boozing. But aside from that, we got to do some pretty fun stuff like snorkelling, our second stint on motor bikes, a 1300 step climb up a mountain to the giant buddha (dealing with psycho monkeys along the way), and getting to take in some insane lookout points. 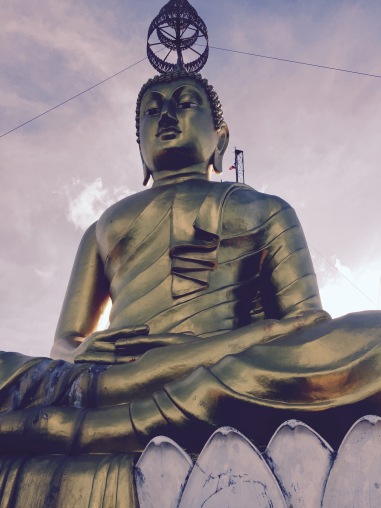 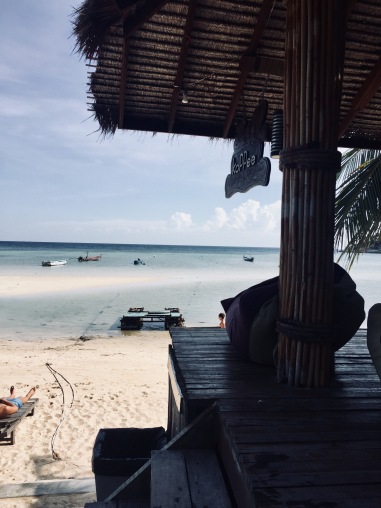 After almost two weeks in Thailand, from Chiang Mai to Koh Phangan, Jordan and I’s trip through SouthEast Asia was sadly coming to an end. We made our way to the notorious city of Bangkok to catch our flight home. With only one full day in the crazy city, we decided to do a Thai cooking class which was recommended by almost everyone we met on our travels. We had thoroughly enjoyed all of the local dishes we tried while traversing the Thai islands, so a cooking class was the perfect way to be able to bring some of our adventures home with us.

Our guide was fantastic . She met up with us at our hostel and led us through the packed streets of Bangkok to a market as well as a few specialty stores, all the while giving us the inside scoop on how the restaurant industry and home cooks alike get their produce and meat. In one afternoon we made about 9 traditional Thai dishes. Some of the classics like Pad Thai and Green Curry, and some new ones to us like sweet mango sticky rice and Tom Yum soup. Both Jordan and I would probably describe ourselves as pretty good cooks, but until you try to season and cook a dish from a very different culture and flavour background … you ain’t seen much honey.

For me, this day was another one of my highlights of the trip. Cooking is something I have really grown to love and enjoy over the past few years. Learning how to prepare traditional dishes was vastly interesting and special for me. To get to know another culture and another person, in my eyes, is to understand what they eat and how they see food. Not to mention I felt like I was starring in an episode of Parts Unknown with Anthony Bourdain.

Thailand has so much to offer its visitors, it really is a wonderland of things to do. It was the perfect place to end our month in Asia with a bang. I can only hope to make it back sometime, not just to Thailand, but to many of the places we got to see over our time spent in SouthEast Asia.

View all posts by Sandra.S